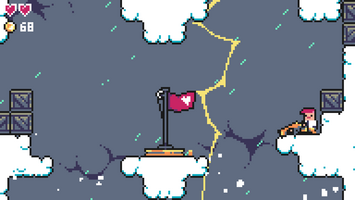 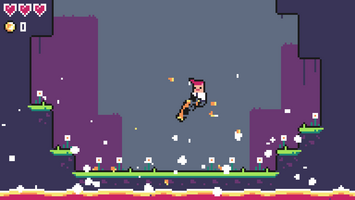 No Leg Lenny v1.1 Changelog ! Juice Jam is over so here's a version of my entry with some bug fixes and improvements. Overall nothing has changed in the game, so there are a lot of changes but all are pretty minor !

• FEATURES
- Space enemies do not die from exploding barrel anymore if the explosion does not touch them.
- Timer can now be displayed during the ascension. Disabled by default, can be toggled in settings.
- Lava now stops right below the player position if he's standing on a checkpoint.
- Run statistics are now displayed with some animations.
- Settings are now saved.
- Added some bounciness on Lenny's dead body.
- Barrels now shoot you straight up, instead of at a wonky angle.
- Explosive barrels now apply a bit more force to Lenny.

• BUG FIX & IMPROVEMENTS
- Fixed a bug making the wrong music being played in space after respawning.
- Fixed lava not killing Lenny while invulnerable.
- Fixed timer being slightly off and starting too soon after using the Reset option.
- Fixed the character sprite flickering when using the mouse and aiming vertically.
- Moon does not appear anymore before reaching it (issue reproduced mostly on WebGL build when not playing in fullscreen).
- Exit button in settings is now disabled in WebGL version.
- Pause menu cannot be opened anymore during end sequence and statistics display.
- Fixed gravity not being reset when coming back from space to clouds (by disabling lava in settings).
- Landing sound does not play anymore for no reason when starting the game.

• ART
- Checkpoints flags now have slightly different animation speed depending on where they are.
- When reaching a checkpoint, previous one goes back to its waiting animation.
- Added a shadow below the coins number to help readability.
- Some polish on ground and space tilesets.
- Shells particles in space are less impacted by gravity like Lenny.
- Added a puff at Lenny position when he leaves the screen once reaching the moon.

Thanks to everyone who played the game and shared their thoughts !

Get No Leg Lenny

The final adventure of Lenny, the legless legend.

The most important feature of this changelog !